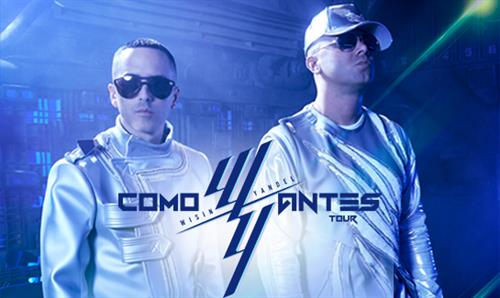 Latin music’s most iconic reggaeton duo, Wisin & Yandel, are going on their first U.S. tour since their five-year hiatus with the Como Antes Tour 2019. Co-produced by Live Nation and Cárdenas Marketing Network (CMN), the 15-city tour kicks off May 23 in Phoenix, AZ and closes out at Orlando’s Amway Center on Sunday, June 23. Tickets are on sale now!

Wisin & Yandel recently announced their first album in over five years, “Los Campeones del Pueblo” (“The Big Leagues”). It marks their 10th studio album and the first one they have recorded together since the multi-award-winning album, “Líderes” (“Leaders”).

The duo also performed eight sold-out shows at the prestigious Coliseo de Puerto Rico, setting a new record for the most consecutive shows held at the venue, as well as the most shows performed by any act, with a total of 25. Yandel is managed by Andy Martinez and Wisin is managed by Walter Kolm. Wisin and Yandel are beloved artists that have garnered numerous hits in their solo careers, yet as a Latin music duo, Wisin & Yandel have achieved unparalleled success by becoming the top-selling Latin urban artists in the world with their music and concerts.

During their 14 year career as a duo, Wisin & Yandel have received numerous multi-platinum certifications in the United States and Latin America and dozens of prestigious awards including a Grammy, two Latin Grammys and 10 Billboard Latin Airplay number ones. On tour, Wisin & Yandel have proven to be a force to be reckoned with by becoming the only artists in the Urban Latin Music genre to sell out both the Staples Center and Madison Square Garden. Along with their 10-piece band, eight dancers and state-of-the-art audiovisual production, their shows are nothing short of exhilarating. Wisin & Yandel are a unique brand of Latin urban music, a fusion of genres and styles delivered with a power and passion that is unrivaled in their musical genre.